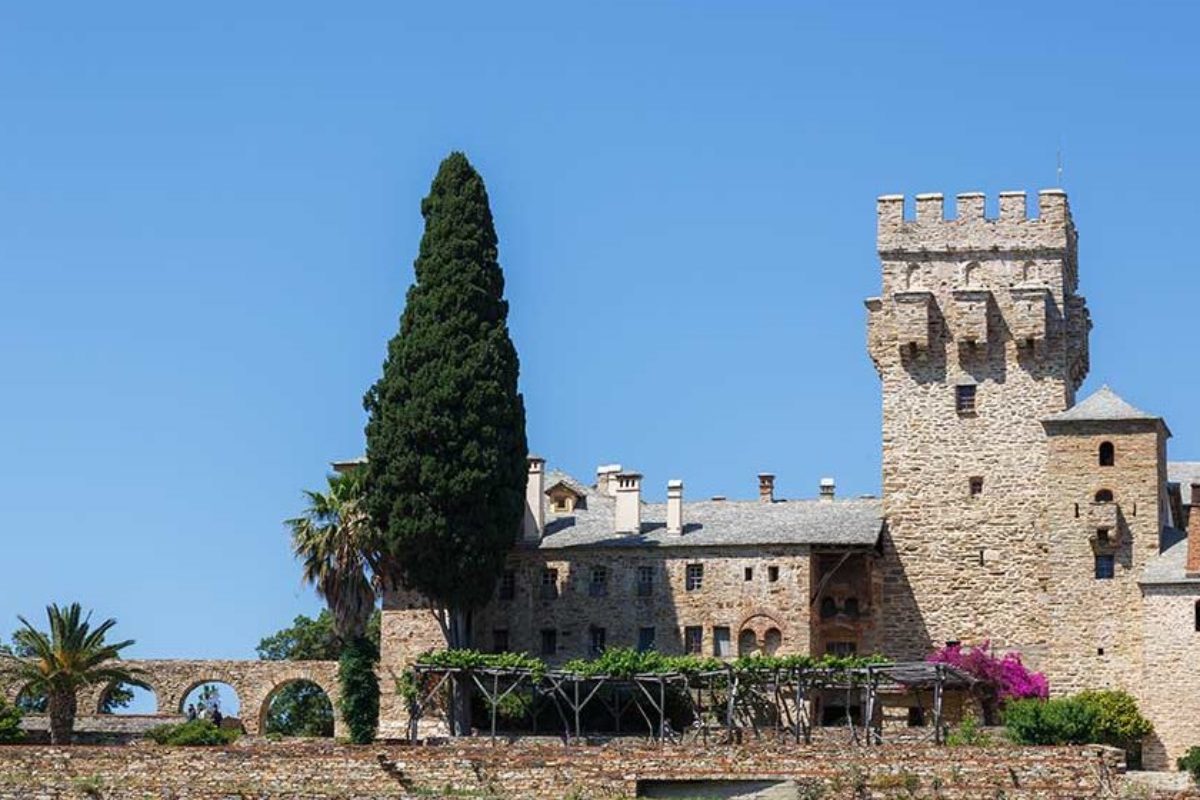 Includes staying for, three, nights in different  Holy Monasteries or cells within the Holy Mountain. The excursion starts from Thessaloniki or Ouranoupilis  where we will acquire our entry passes to Athos. The entrance to Mount Athos is by boat and destination to Dafni. On our way to the west coast of Mount Athos, we will have the opportunity to see the Holy Monasteries, Dochiariou, Xenophon, Agios Panteleimonos, Xeropotamos, arriving in Dafni, and departing for the monastery to be hosted for our first stay.

* Stay in the monasteries depends on availability for hospitality

9:00 Meet at the Pilgrim’s Office in Ouranopolis for entry pass
9:45 Depart Ouranopolis by boat to Daphne
11:50 Arrive in Daphne port from where we will proceed to the monastery  where we stay our first day

Arrival at the Monastery

Athonite Welcome, with coffee, raki, and loukoumi, in Archontariki, and then arrange in the guesthouse of the monastery for our stay. An expert guide will always be present for the entire duration of the tour visit. Photographs of the outer monastery surroundings and courtyards are permitted however NO photographs within the churches are permitted.

The program starts with the Holy Sequences

03:00 – 04:00 Early morning prayers around
07:00 Divine service
09:00 Morning meal with the Monks, according to the typical of each monastery
09:30 Departure for  Karyes. Karyes is a central geographic point on Mount Athos from where most monasteries can be reached efficiently

Our visit  includes: Guided tour of the Karyes area

PROTATO  is called the cathedral which is located in the center of Karyes on Mount Athos. The temple, which is the oldest preserved of Mount Athos, is dedicated to the Assumption of  Virgin Mary. It is best known for its relics, such as the icon of Panagia Axion Esti. The temple houses well-known murals attributed to the principal representative of the Macedonian faculty, Manuel Panselinos. The hagiography took place in the 14th century, while during the Ottoman rule, additional works were made.

The Holy Monastery of Koutloumousiou

The Koutloumousiou Monastery: is an Eastern Orthodox monastery in the monastic state of Mount Athos in Greece. The monastery ranks sixth in the hierarchy of the Athonite monasteries.The monastery was raised with the help of voivodes Nicolae Alexandru and Vladislav Vlaicu from Wallachia. Among the treasures of the monastery is the purported largest relic of the True Cross. The monastery’s library contains 662 manuscripts and approximately 3,500 printed books.It has 20 working monks.

Dedicated to transfiguration of the saviour

It was founded on the Emperor Alexios I Komnenos on the end of the IA century. The katholikon of the monastery, built in 1370, was painted in 1540, except for the narthex, which was frescoed in 1744. On the left side of the katholikon, there is the .chapel of the Virgin of Fervor Protection, where the miraculous icon – Protector of the monastery.

The Holy Monastery of Iviron is an Eastern Orthodox monastery in the monastic state of Mount Athos in northern Greece. The monastery was built under the supervision of two Georgian monks, John the Iberian and Tornike Eristavi between 980-983 and housed Georgian clergy and priests.[1] Iveron literally means “of the Iberians” in Greek. The name Iviron originated from the ancient Georgian Kingdom of Iberia (Iveria) where the master architect of the monastery Ioannes was from.

The monastery ranks third in the hierarchy of the Athonite monasteries. The monastery library contains 2,000 manuscripts, 15 liturgical scrolls, and 20,000 books in Georgian, Greek, Hebrew, and Latin. The monastery has the relics of more canonized saints than any other on Mount Athos. The Panagia Portaitissa, a famous 9th century icon, is also located at Iviron. The monastery has about 30 working monks and novices, none of whom are Georgian. However, there are forty or so Georgian hermits living in hermitages near the monastery.

The Skete of Saint Andrew, also the Skete of Apostle Andrew and Great Anthony or Skiti Agiou Andrea in Karyes is a monastic institution on Mount Athos. It is a dependency of Vatopedi Monastery and is the site of the Athonias Ecclesiastical Academy. With the continued growth of the Skete in monastic numbers, a central church, dedicated to Saint Andrew, was built in 1867 and consecrated in 1900 by Patriarch Joachim III of Constantinople. The church is the largest on Mount Athos and is amongst the largest in the Balkans.

At around 4pm we leave for the Monastery to host us, and follow the typical of the monastery. Vespers ect…..

We continue visiting very famous and well known monasteries for their history, such as

The Skete of Prophet Elijah (Greek: Σκήτη Προφήτη Ηλία) is a cenobitic skete of the Pantokratoros monastery in Mount Athos, Greece. It was founded in 1759 by the Ukrainian monk from Poltava Paisius Velichkovsky.[1] Within the complex are a main church (built 1903) and three chapels. There are also an extensive library and two icons reputedly with miraculous powers.

St. Panteleimon Monastery (Russian: Пантелеймонов; Greek: Άγιος Παντελεήμων, Aghios Panteleimon), known as Rossikon (Русикон, Ρωσσικόν), is an Eastern Orthodox monasteryThe monastery’s katholikon (main church) was built between 1812–1821 and is dedicated to St. Panteleimon. The library is housed in a separate building in the monastery’s court. It contains 1,320 Greek manuscripts and another 600 Slavonic ones, as well as 25,000 printed books. In addition, the library has a few priceless relics, such as the head of Saint Panteleimon, one of the most popular saints in Russia. The 19th-century monastery bells are said to be the largest in Greece. There is a daughter community at the monastery at New Athos, Abkhazia.

At around 4pm we leave for the Monastery to host us, and follow the typical of the monastery. Vespers ect…..

The program begins with the Holy Sequences

09:00 Departure from monasteryDEPARTURE  FROM  MONASTERY
11:00 Arrival to the port of Dafni by car
12:00 Departure by ship we return to Ouranoupoli 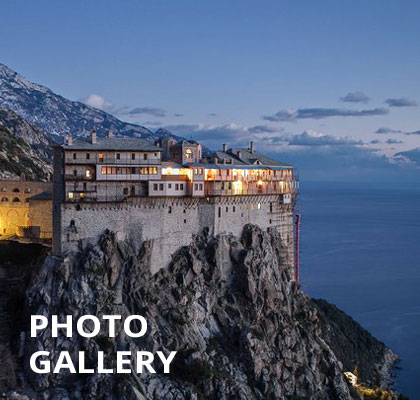 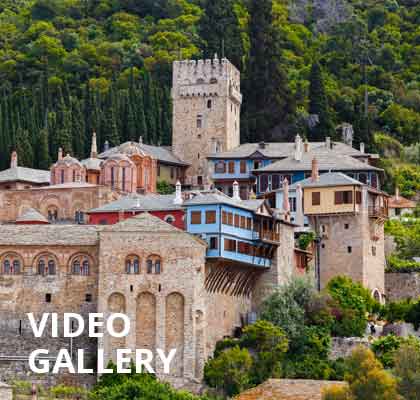